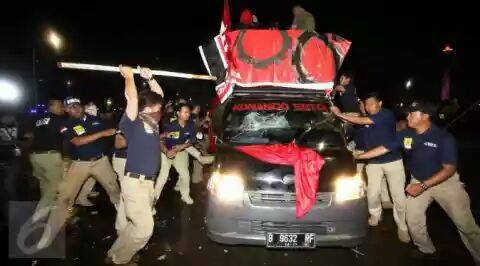 Labor activists have pointed fingers at the Jakarta Police for allegedly committing violent acts when they tried to disperse a labor protest from in front of the State Palace in Central Jakarta, on Friday.“The police have committed violence against our friends — Tigor Gempita Hutapea and Obed Sakti Luitnan — and 23 workers during Friday’s rally. The police failed to apply human rights standards. They, instead, triggered the clash,” Alghiffari Aqsa, the Jakarta Legal Aid Foundation (LBH Jakarta) director, said in a press release on Saturday.Thousands of workers from Greater Jakarta staged a street rally on Friday, demanding the revocation of the newly issued Government Regulation (PP) No. 78/2015 that stipulates the calculation of the annual minimum wage increase by using the current fiscal year’s inflation and gross domestic product (GDP) growth rates. They also called for a wage increase of 22 to 25 percent next year.The rally ended with a clash between protesters and the police.Alghiffari explained that the clash broke out at 8 p.m. when the police started to beat a number of protesters who refused to end their action. The police also hit Tigor and Obed, who at that time were documenting the rally using their mobile phones.Alghiffari said Tigor and Obed tried to explain that they were from LBH, which was assisting the alliances. However, the police ignored them and dragged them over to the police cars along with 23 protesters.Both activists suffered from wounds and bruises to their heads and stomachs.

Sourced through Scoop.it from: www.thejakartapost.com